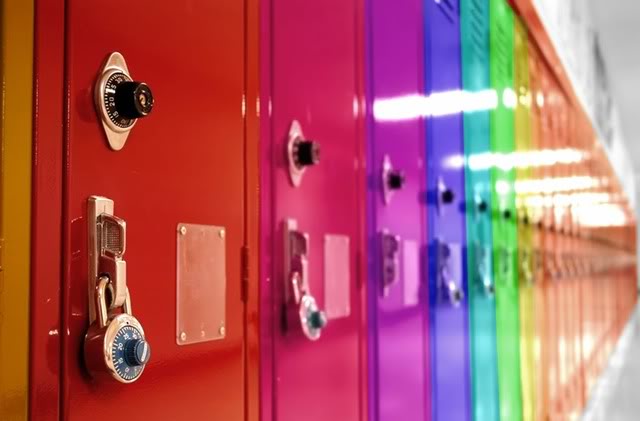 The alarm in the middle school was blasting. I couldn’t even walk in the door, it was so unbearably loud. I waited outside until it was over. I was hoping it wasn’t a bad omen. Today was the day of my Big Meeting and I felt I needed all the luck I could get.

We gathered together in the principal’s office. I knew the Capital Letter Issues on the agenda:  E’s Name on his Records, the Bathroom, and the Locker Room. These are hot button issues for all parents of trans kids. So far, the middle school had professed to be supportive. But today was the day that they had to prove it. I was alone, armed only with my Guide to Supporting Transgender Students K-12.

Right away, the head of guidance took aim at Capital Letter Issue Number One. “I want to put your mind at ease. We’ve already changed E’s name in the system. And his gender marker is changed to male. So any teacher looking it up, any class list that gets printed out for a substitute, anything at all – it will have E’s preferred name. We will deal with standardized testing issues when the time comes.”

I had played the following scene over in my mind:  E is sitting in class with old friends and new, some of them unaware that he ever had a different name. And a substitute or a forgetful teacher calls out that wrong name, based on what was in the school system. I pictured the kid’s heads turning – the ones who knew looking right at him, the other’s eyes confused and darting around until they landed on the same target.   I pictured E staring back at the teacher in shock and sadness. I picture his little head dropping down, his breath halting, thinking – that’s not me. That’s not me.

But this was not going to happen to E. I know this may not seem like something that is a big deal, but trust me, it is. And the weight of it sliding off by back revealed its heft. My mind swirled with relief. There was no way that E was going to be misnamed at school. There were no mistakes to avoid.

This was going really well.

I didn’t expect Capital Letter Issue Number Two, Bathrooms, to be much of an issue. E would be allowed to use the boy’s room, as well as the gender neutral bathroom. Just like any other boy. Then they asked me what E was thinking about Capital Letter Issue Number Three: the Locker Room. In middle school, the kids change their clothes for gym class. E knew this, and he told me a couple of times that he wanted to change in the boy’s Locker Room with the other boys. So this is what I told them. But I also wanted a back up plan, in case E realized in the moment that he wasn’t ready. He still hadn’t taken his swimshirt off at our public pool, so I knew and understood that this was still a concern for him.

They gave me a tour of the Locker Room, a dingy and dank little room with open space for changing as well as two bathroom stalls. And in the hallway, right outside were a boys bathroom and a gender neutral bathroom. Lots of options for E and any kid feeling uncomfortable.

We also addressed safety in the Locker Room and I was assured that the gym teachers would be more of a presence there than ever before.

They had thought this through. They anticipated E’s needs and offered support on all fronts. I couldn’t thank them enough, and I let them know that we were collaborators who should support each other in E’s time in the middle school. They were thankful too.

Over the next week, I contacted all of E’s teachers on behalf of my husband and I, letting them know about E.

We are writing to you today because you have our son, E, in your class.  E is an incoming 6th grader.  Last year, while in fifth grade at Concord, E made a very big and important decision: he socially transitioned from female to male.  His entire life, he experienced himself to be male and he made claims about his maleness for years, so we were very proud of him when he decided to affirm himself.  But, as you can imagine, we were also quite nervous.  The staff at Concord was amazing in their willingness to understand about gender identity and to support E in his transition to using a new name and male pronouns.

Back in March, in a very well-planned character education session, E’s classmates were told about his transition.  The Concord kids were truly awesome in their acceptance and support of E.  So, there is a population in the incoming 6th grade that knows E’s history and have adjusted to his affirmed identity, as well as a handful of other kids that E has known from other schools.  There are also many children that do not know E’s history and do not need to know.  While E is proud of his status as a transgender kid, the decision to reveal this status to the people in his life who did not know him as a female is complex and will come from him in his own way.

The decision to let you, E’s teachers, know that he is trans was made in conjunction with the administrative and guidance faculty at the Middle School, who have also been incredibly supportive of E and our family.  We wanted you to know in case something comes up in the classroom, you could be aware.  For example, a former Concord student may make a mistake and use his previous name or pronoun.  (If they do, the usually just self-correct and move on.) Also, there are lots of daunting statistics out there with regard to the safety of kids like E, so we felt that the best way to keep him safe at school is to inform his teachers of his transgender status.

We also want you to know that we are here to answer any questions or concerns that you may have.  We have learned a lot on this journey and are more than happy to share information with you.  As we hope you are here for us in supporting E, we are here to support you as well.

So when E bounced into the door after his first day of middle school, telling me how great everything was and how much he loves his new school, I absolutely believed him. They were ready for him as much as he was ready for them.