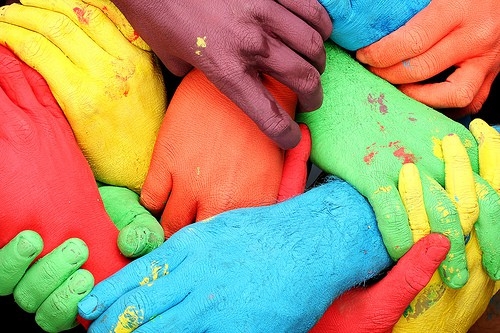 Ever since E told me that she is a boy in our very first bathtub talk, she has maintained her “don’t tell anyone” stance. She knew I would tell her dad, my husband, but beyond that, the door was locked.   Her sense of herself as a trans person was always something that she wanted to keep just there, with herself.

A few months ago, she began to express her fear. The fear of people thinking she is weird. The fear of losing her friends. I have always tried to comfort her at these times, reassure her. She always just listens, never really saying much, just taking it in. This is not her usual way. She can be very strong and opinionated. She is not afraid to challenge me when she disagrees or doesn’t like what I have to say. But during these conversations, she is quiet. I both like it and am uneasy. What is going on in her beautiful, tender mind?

Now I see that talking about that fear is all part of the process. It was a big step for her to express that vulnerability and my challenge was to respect her feelings while gently finding ways of supporting her in moving out of that fear. Like many things along the way, I struggled inside while putting on a brave face to her. I felt my way out of these conversations usually feeling like I managed to get through the weeds somehow. I always want to talk more, but that’s another thing I have to respect: her limits of enough, mom.

Over the years, it was impossible for me to honor her “don’t tell anyone” request. But I did let her know when I shared her story and she allowed it easily. It was just a few close people and I think she understood my need to talk. She recognized that her enough, mom policy was not working for me.

Since her decision to transition, things have changed. She wants me to tell people, people she selects. A few parents of her friends. Our close family. When she asks me how people react, she is so eager, so ready. She wants to hear that they are ok with it, that they love her, that they are happy that she is becoming herself. And that is what she gets to hear because that is what they all say.

E plays ice hockey. It is a part of her world that she treasures. On her team, there are all boys, and E is their goalie. They are a talented crew of fierce competitors, kind hearted humans, and absolute goofballs. She loves them and they love her. At the end of every game, they surround her, offering her cheers on a great win or support when it wasn’t their day. They are there for each other. This tone is set by her two coaches. We couldn’t ask for a better team experience for her.

But it’s hockey. It’s an uber masculine old school world that smells bad and swears a lot. For all those reasons, I love it. For those same reasons, I have a bit of a disconnect. My kids like to tell me I’m a peace nut, and it’s hard to reconcile that with their hockey lives. There’s not a lot of recycling in hockey. But there is an abundance of heart.

I emailed them. It was one of those hold-your-breath-and-press-send moments. I have such faith in these guys as human beings and while I really believed that they would have a positive response, I was nervous. It was so important to E that they approve of her.

Of course, they did. Their responses brought tears to my eyes and filled me with hope and happiness. It was the first thing she asked about as she walked through the door after school – what did my coaches say? I asked her if she wanted me to read the emails to her.

No! Just tell me if they are ok with it. (translation: enough, mom.)

Yes, yes, yes – they are ok. They love and support you. But they want me to let you know that they are going to be just as hard on you in practice.