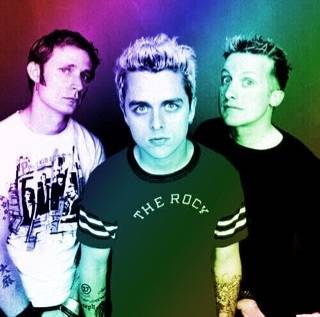 Last summer, E went to a camp called School of Rock where he played the drums. Once, during a break, the counselors broke out into Green Day’s “Jesus of Suburbia.”   When E came home that day, the first thing he told me as he hopped in the car was that he was the only camper who knew that song.  In fact, he knew the whole thing. All 9 minutes of it. He played along and knew every word. I was picturing his little self behind a big drum kit, surrounded by all those teenagers in their ratty t-shirts and skinny jeans, singing “There’s nothing wrong with me. This is how I’m supposed to be. In a land of make believe, that don’t believe in me.”

To say that I am a Green Day fan is an understatement. I absolutely love everything about them. The music. The attitude. The social justice. The eyeliner. Everything. They stand on the side of the ones that no one else does. The music of Green Day is the soundtrack of my home.

This is met with varying degrees of acceptance by the members of my family and while we are all fans, E is definitely the one who indulges me the most. He is my little partner in our Green Day bubble. He will listen to all the songs and watch the videos with me. He doesn’t get annoyed when I want to play Green Day AGAIN in the car, and sometimes even requests it. He is a genuine fan.

A few years ago, after he went to bed, E snuck downstairs with one of his night time offerings. In his hand was an oddly cut out piece of paper that contained a hand drawn picture of a guitar and the following letter to Billie Joe Armstrong:

My family is a Giant fan of Green Day but we especially like you. I play the drums and am learning guitar and bass. I’m 8. My dad plays guitar like you. Music is Awesome! I always listen to your music. Merry Christmas.

From your #1 fan E [previous name]

PSS: If you could write me back that would be awesome.

Of course, we mailed it out the very next day. A few weeks later, the following hand written note with four guitar picks taped on it arrived in the mail:

I’m so glad you think music is awesome. Because I think it’s pretty awesome too.

And I think you’re even more awesome!!

This letter has been framed and hanging in E’s room ever since. We recently repainted his room, and as we were going to re-hang his pictures. He looked at that one for a long time. He loves it and is proud of it. But it has his old name on it and he doesn’t want to hang it up again. He is confused about what to do. I’m thinking maybe it’s time to write another letter.

In those early days, right after E told me that he is a boy, I had some sad and confusing days. I didn’t know what to do. I felt a huge responsibility in an arena I knew nothing about. I wanted to help my child. I was afraid for what my child’s life would be like. I felt like I was losing something. I didn’t know anyone else going through this. I read a lot of books, spent countless hours at my computer, cried a lot of tears, and listened to a lot of Green Day. They had just released a trio of albums and all that new music, along with my old favorites, were a constant companion. I sang Last Night on Earth to E every night.   It comforted both of us.

So thanks, Green Day, for taking this ride with us.