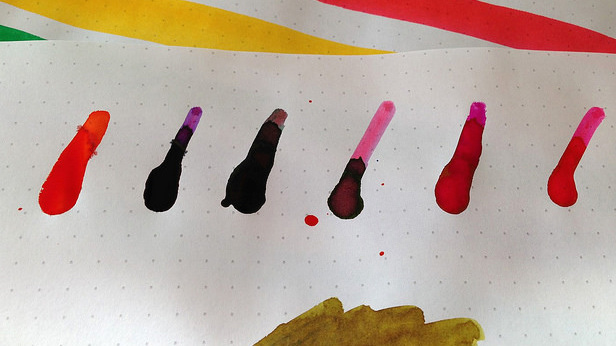 My husband picked it on the day I found out I was pregnant. Still, we had considered others.

How about Ivy? Millie? Lucy? Daisy? So many hours of this speculation. Trying them on with the middle and last name that we knew. Laughing at funny combinations. Wondering what nicknames could follow. Putting it together with my older son’s name, knowing how often they’d be said together. All of those names were good, but none were The. Absolute. Perfect. Name. The one he stated on day one was it. There was no doubt.

It’s on the growth chart that hangs in her room, notched and dated.

It’s on the framed picture of our family that she drew in pre-school.

It’s on every art project she has ever done.

It’s on the caricature that was her souvenir from Nantucket last summer.

It’s on the letter that she got from Billie Joe Armstrong.

It’s on every Valentine’s Day, Mother’s Day, and birthday card she has ever given me.

It’s on every little crumpled love note or apology note that she has left on my pillow, and there are many.

It’s on her birth certificate.

It’s on her social security card.

It’s on her passport.

It’s on her birth announcement.

It’s on her drumsticks, her guitar case.

It’s on every letter to Santa, the Easter Bunny and the Tooth Fairy.

It’s on 10 years of Christmas cards.

It’s on one Christmas ornament for every year she has been alive.

It’s on her Christmas stocking.

It’s on the pillow that my dear friend, 8 years gone, had made for her when she was born.

When she was selecting a new name, she asked me what names we were thinking of for a boy when I was pregnant with her. She tossed around those, and some others. Writing them out. Saying them aloud with her last name. She ended up picking one from the list of names that we had considered a decade ago. The. Absolute. Perfect. Name.

6 thoughts on “The. Absolute. Perfect. Name.”